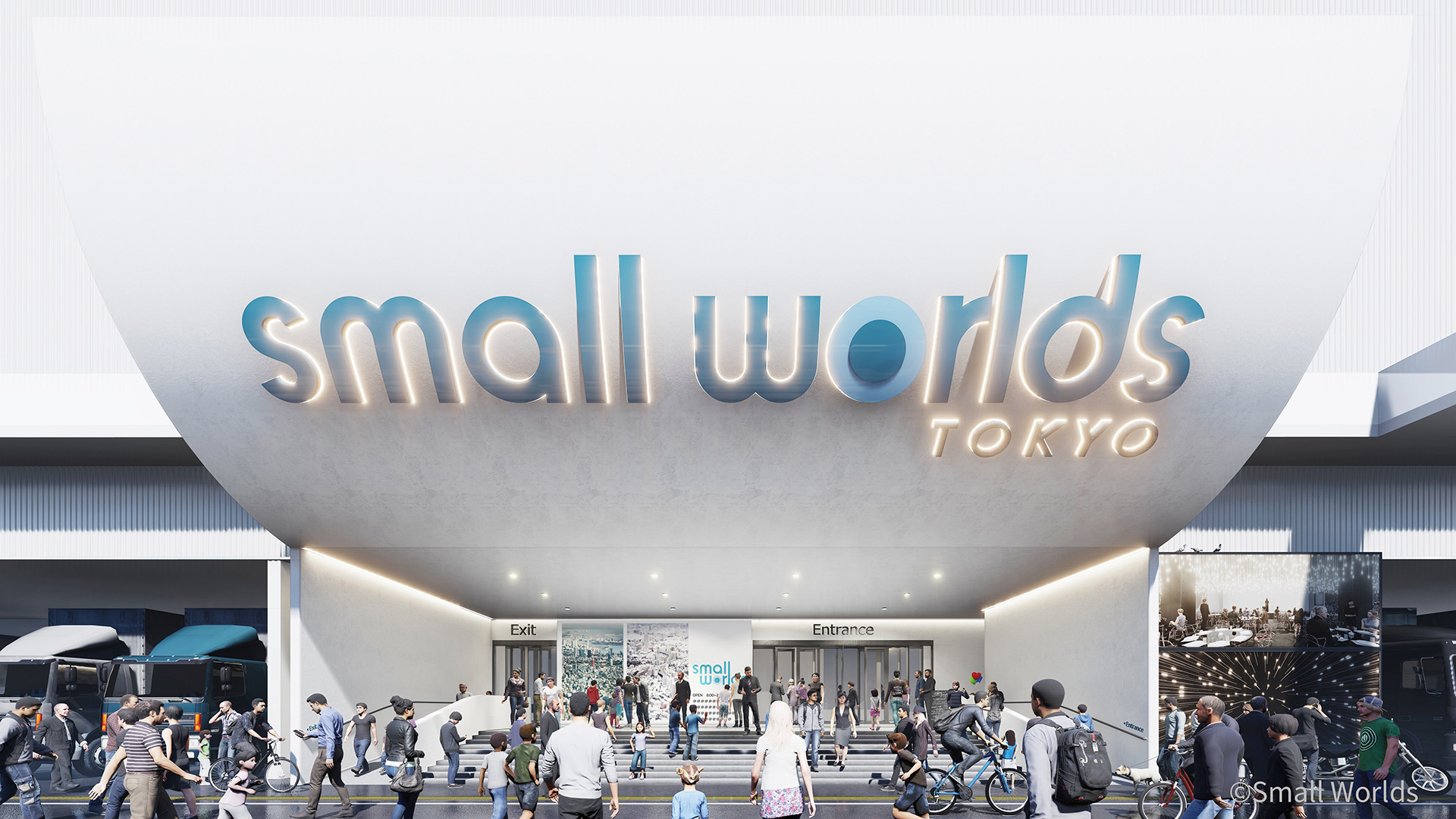 The biggest attraction of this park is its incredible sense of immersion never achieved at this level before. Several renowned experts have been involved in this project, including not only acclaimed Japanese creators Tatsuya Kaneko and Shoji Kawamori, but also a team of accomplished engineers originally from Japanese manufacturers. This park realizes a ‘moving miniature world’ that combines the sophisticated techniques and advanced technologies of Japan to achieve fascinating spaces like never envisioned before, and where visitors feel immersed in the world as soon as they step inside. Locations from massively popular productions―namely the ‘Nostalgic 90s Azabu Juban’ and ‘Crystal Tokyo’ areas from Pretty Guardian Sailor Moon, as well as ‘Tokyo III’ and ‘Cage’ areas from ‘Evangelion’―reproduce spaces that will astound not only series fans, but all visitors with their realism.

Another unique feature of the Small Worlds Tokyo is the fact that visitors don’t simply “view” exhibits, but actually become a participant in them. The park will offer an “Avatar Citizenship Program” in which visitors can capture a 3D scan of themselves and have their avatar become a part of each area. This delivers a never-envisioned-before experience where visitors can enjoy a rewarding break from their everyday hectic schedules.

Due in part to government efforts to reform working styles and attitudes towards time-off, as well as increasing number of foreign visitors to Japan, the country’s leisure-time market is expected to continue to grow significantly. Also, with the ever-increasing population of central Tokyo; growing trends of ‘experience-based consumption’ and ‘nighttime entertainment’; and uncertain weather of recent years, urban indoor entertainment facilities are attracting major attention as places for casual fun even in bad weather. Meanwhile, given the growing popularity of urban miniature theme parks overseas, especially Germany and the Netherlands, it was decided to open this facility in the Ariake area, undergoing an urban renewal, as an urban indoor entertainment facility that can be enjoyed by visitors from both in and outside Japan.

The vision for Small Worlds as a theme park is aimed beyond just being an entertainment destination.
The first goal is to develop the park as a “showcasing venue.” This ‘moving miniature world’ that merges sophisticated techniques and advanced technologies offers visitors opportunities to learn about company products and technologies while enjoying themselves. In a sense, this gives it the characteristics of an “owned media theme park.” Kansai Airports, Japan Airlines, and Prima Meat Packers are already confirmed as official partners, and discussions are also underway with several other companies.
The second goal is to develop the park as an “educational venue.” This will enable the park to also serve as an educational facility where the children who will lead the next generation can learn about advanced techniques/technologies while experiencing the diversity of our world. The park will offer a variety of educational programs, including STEAM education and international understanding, in cooperation with the embassies of various countries as well as companies, associations and schools both in and outside Japan.

The 2022 launch of Small Worlds in Okinawa has been decided, and plans to expand overseas are already moving forward. You can look forward to seeing further developments both in and outside Japan in the years to come.

Progressive sales for the Avatar Citizenship Program mentioned earlier are scheduled to begin on August 9, 2019 (Fri). More details on facilities and ticket sales will be released as information is available.

Park Overview
Entry to Small Worlds Tokyo begins at Immigration/Passport Control. Once inside, visitors move from the real to miniature world by passing through a “growth ray tunnel” that makes them feel as if they have been transformed into a giant.

Modeled after Kansai International Airport, the miniature scale of this area gives visitors a chance to take photos from angles that would be almost impossible in the real world. Every aspect has been reproduced faithfully reproduced, from airplane fuselages to the sounds of engines during takeoff. A total of 40 aircraft successively take off and land, allowing visitors to see a full day of airport activity in around 30 minutes time.
Space Center

Modeled after the NASA Space Center, the Space Center area, produced by Shoji Kawamori (General Director, Space Division), features the launch of five space shuttles. Around 48 launches per day are scheduled, which will faithfully reproduce even the smoke and sounds of a real launch.
Global Village

This area showcases an original Small Worlds Tokyo world interspersed with elements of fantasy and steampunk. With some 20 to 30 innovative mechanisms operating, visitors can enjoy the sense of the world while trying to find them all. This area offers a fun fictional world while also giving visitors the feel of traveling the world.
Pretty Guardian Sailor Moon

The Tokyo III area reproduces the feel of the Evangelion world at 1/80 scale. It is divided into the old city in the foreground and Tokyo III in the background, in a design that uses perspective to maximize enjoyment of the area. The cage that Evangelion takes off from has also been reproduced, where visitors can be fascinated by a portrayal of Evangelion Unit 01 blasting off.

Executive Officer
Tatsuya Kaneko
Tatsuya Kaneko was born in 1953. In 1977, he revealed his diorama work in a model magazine, making his debut as a pro model builder. Since then, he has spent the last 40 years releasing a wealth of artistic content through model magazines, model manufacturers, commercials, TV and special exhibits, establishing the high standard at which scene-based models are realized in Japan. In 2019 he became an Executive Officer of Small Worlds Inc.

Official Advisor & General Director of the Space Division
Shoji Kawamori
Shoji Kawamori is active as a director, planner, original story and screen writer, film and stage director, and mechanical designer. The animated TV series “Super dimension Fortress Macross,” in which he was involved as one of the original writers while studying at Keio University’s Faculty of Engineering, has been broadcast around the world. As a trailblazing example of cool animations from Japan, this series made a major impact on global entertainment including Hollywood movies. The Valkyrie mecha that debuted in the animation also became a hit product, anchoring him as a leader in the design of transforming mechas. At the young age of 23, he was chosen to direct the movie “Super dimension Fortress Macross – Do You Remember Love?” His more recent writing and directing credits include “Genesis of Aquarion,” “Macross Frontier,” “AKB0048,” “Macross Delta,” and “Last Hope (Unit Pandora)”

Satomi Sakai
Satomi Sakai graduated from Kogakuin University in 2014. After gaining experience at Toshiba, she joined Small Worlds Inc. in 2019. As head of the Creative Department’s Design Unit, she led the design of flight equipment and foundation of the Kansai International Airport area, in which she succeeded in realizing highly-realistic plane movements―from takeoff and landing to taxiing and pushback. During her time at Kogakuin University, she also participated as a member of the World Solar Challenge 2013, one of the world’s largest solar car competitions.

・Avatar Citizenship Program (With Annual Passport)
Progressive sales for the Avatar Citizenship Program are planned. This completely new type of theme park experience enables visitors to simultaneously enjoy “watching” and “living” in the imagined world by having a 3D scanned avatar of themselves inserted into the model area.
Tokyo III of the Evangelion area will be the first area available to “live” in.
Price: Planned at 19,800 yen (age 18 and under: 17,600 yen)
Sales launch: Friday, August 9, 2019
LP：https://smallworlds-eva.jp 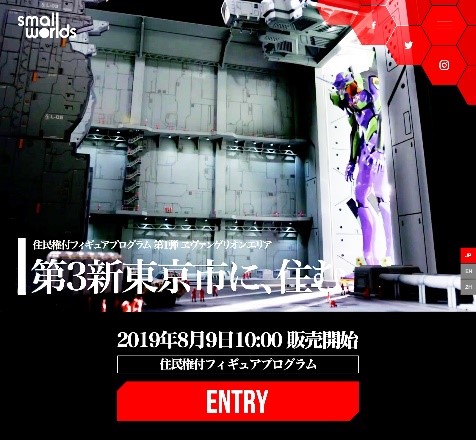